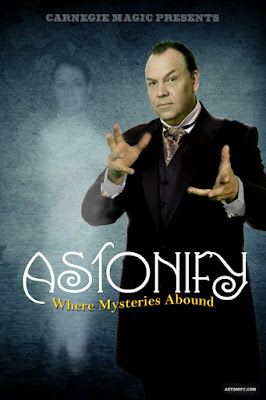 The new show, Astonify, is really moving ahead well. I have been testing out various routines on test audiences and have been thrilled with the responses. This is a very different sort of thing for me. I have created 'themed' programs in the past, but for this show I really delved much deeper into the process. The results are astonishing, or should I say astonifying.

The show is made up of three parts, but right now, the only part you see in the promotions is the ghostly part. The first routine that opens the Spirit portion of the show is my take on a Woody Aragon routine. I don't want to say any more than that, except, I believe my version is the best rendition of his fabulous effect. The Spirit portion is supposed to close with the Cabinet of Spirits, which is what we are calling the Spirit Cabinet. Our version has similarities to past routines, but we think the things we've added to our version will make it stand out greatly.

Right now, I think I'm most excited about the Conjuring portion of the show. This is the longest part of the show and opens with an interactive routine and then an audience volunteer sequence. It isn't until the third effect in the show that a prop is even seen. Speaking of props, I expect there to be a lot of props in this show. It is afterall, a Victorian based show, and the magic from that time period was very prop heavy. A routine I really would like to include in the show is the Kellar Coffee Trick. I've loved this since the first time I read about it many years ago. Now, I own the props for the Coffee Trick....well actually I own most. I still have one piece yet to track down, or build. But I would like to include it in the show because it's another way to involve the audience. And here is a treat, below is a video of the Coffee Trick. This is NOT Victorianized, however. It's just me having some fun on National Coffee Day. The show routine will be slightly different, but you get the general idea.


The one portion of the show I'm not discussing is the Clairvoyant section. OK, I will discuss it a little. With the popularity of Mentalism at an all time high right now, I wanted a way to present the material in a manner that no one was currently using. Now, I say no one, but there may be someone out there following this same path. If so, I have not heard. Our take is not completely original. I read about it years ago and the performers who used this unique approach, lived years before the book was written. So to today's audiences will it look brand new. It is a perfect fit for Astonify, and I'm anxious to get it rolling.