New Video From The Steampunk Illusionist

To give you a little background, the first week of Jan 2017, I started a new project called Weekly Wizardry on Facebook. The idea is to post new magic trick videos every week all year long. Some weeks will have more than one, so when it's all over there will be about 58-62 unique magic videos.

All of the videos are short, 30 seconds to 1.5 minutes. That might change as time goes on however. The latest video (above) featured a 100 year old magic item. Knowing of course that the magic from 100 years ago was presented in a slower and more deliberate fashion, I had to try and come up with a way to make it fit modern standards but still have the old time feel. I believe I accomplished the goal well.

But an amazing thing happened. After we worked out the handling of this new/old trick, we began to see it as not a stand alone effect, but rather part of a much longer and more in depth magic routine. This is VERY exciting to me and the work has already started on a sort of magic/manipulation act that begins with the item you see above and morphs and blends into other effects, culminating in a lot of interesting surprises along the way.

One issue we have is that some of our material is very Victorian and other stuff is clearly Steampunk. Finding a happy medium between the two is the tough part, but we are working on it. I expect to have a general outline of the act very soon!!!
Posted by Carnegie at 3:26 PM No comments:

The Steampunk Illusionist Auditions for Americas Got Talent 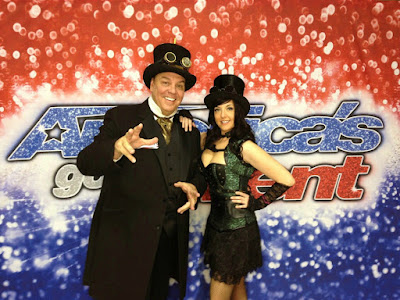 That's right, we auditioned for America's Got Talent yesterday. We were supposed to audition in Philadelphia, but due to ICE conditions up and down the East Coast, we opted to change our date. So instead, we auditioned in Charleston South Carolina. Lots of benefits to doing that. #1 we figured there would be less people at the audition. #2 We figured there wouldn't be many magicians. #3 Due to number 1&2, I thought we'd stand out more. We were correct on all accounts.

To give you a little background on the days leading up to the audition. We had rehearsed our 90 second spot for 2 months. We were MORE than ready. Had we done the audition in Phili we would have given a strong performance, no question. But starting last Thursday, I came down with a cold. I wasn't even sure I'd have a voice by the day of the audition. I was feeling fine most of the days leading up to the audition, but ON the day of, I was not feeling well at all. My energy level had dropped severely. I hardly spoke during the drive that day. Thankfully, I had my trusty partner with me to fill in where I was not able. 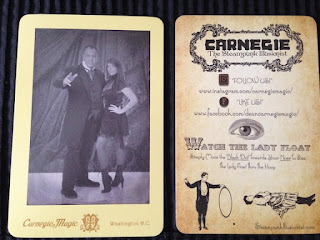 We stood out the moment we walked in the door. People LOVED our costumes! It was clear to everyone we were a magic act. Many people came up to talk to us, both contestant and staff due to our steampunk clothing. I had prepared a little something to give out whenever we met someone. It's a take off on an old tin-type photograph. Except ours had our contact information on the back. We gave out quite a few of those. OH, and they had  magic trick on them as well, which made them even more special!

I heard numerous comments from people that we were the best dressed act at the event. By the way, we met so many nice people there. We had such a great time talking with folks, learning about their stories and their talent. When we got called for our audition, we were in a group of about 8 other people. All of them were singers with the exception of one girl who danced, and us of course. Those folks had some mad talent!!! I wouldn't want to be a singer and go up against anyone of them. WOW. But being the lone magic act, I think we really stood out. I am pretty sure there was one other magician at the event that day, but doubt there were many more. It was a singer and dancer crowd.

So the big question, will we make it on the show? That is anyone's guess. We won't know until Spring and if it happens, we will not be able to talk about it. All we can say is that we auditioned and it went really well. I don't want to reveal WHAT are trick was in case we are asked to do it again for the BIG JUDGES. So for now, wish us luck and stay tuned for more! I can say this, The Steampunk Illusionist would be an incredible choice for America's Got Talent Season 12!!!!!!! #NBCAGT