Astonify At The Old Jail Museum in Warrenton VA 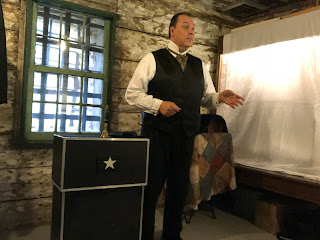 The Astonify Show was presented August 11th at the Old Jail Museum in Warrenton VA as part of their Sleepover at the Jail Event. I presented an hour long version of the show which was kind of customized to the venue. Due to the small performing area, I created a show that utilized many audience members, in fact, all but two routines were audience participation.

I began by sharing a couple 'ghost-like' stories from my travels. And then told them about the incident that already took place at the jail. My brand new iPhone X stopped working. I was in the midst of taking photos and it just locked up. I tried to reboot it, but no matter what I did, the phone would not turn off. (when I left the building after the show, the phone worked fine)

Two audience members told me they heard a voice say, "get out" during my show. All the jail cells are haunted apparently. In fact, there was a mannequin inside of a glass cabinet at the back of the room whose head had moved directions DURING my show!!!!

This version of ASTONIFY had several card routines, a wonderful rope routine that looks impossible, a very surprising effect with a borrowed ring, a routine using Spirit Photographs, the 19th  Century classic The Spirit Dial, and finally I bring out an actual Spirit Trumpet which can be examined and then we use it to contact a spirit.

As with every show I've done at a haunted location, there were issues with things. These, thankfully, were minor, but it did cause me to drop two routines from the show. As it turned out, I didn't need them, as I still went slightly over an hour according to my clock.

I will admit to being a little nervous during the Spirit Trumpet routine as I feared a voice other than Anna Eva Fay's would be speaking through the trumpet. That did not happen, but damn if the spirit didn't decipher and reveal something that no one in the room was aware of. Crazy!

The folks who attended my show, were going to partake in a paranormal tour following the show, so I can't imagine what happened during that activity! Then they all were sleeping over at the jail. I don't think I could have done it!!!! 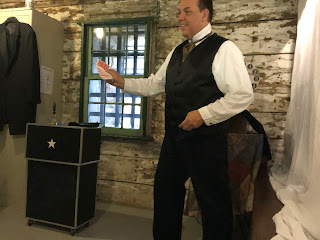