The Magic of Maro - Victorian Magician 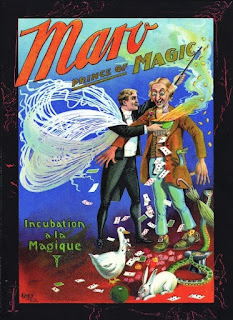 A couple weeks ago now, I drove to Leland Michigan. It's about 800 miles from where I live and it's on the western side of the state. The area is beautiful, the lakes are breathtaking, and the people couldn't have been nicer. But I was there not to visit but for work. I had been hired to do a couple magic shows and to present a lecture on a magician who died over 100 years ago. Not a well known magician either.

I was instantly intrigued by this magician named Edward Maro. I knew little of him. Actually, one thing I did know was that a huge boulder marked his grave in St. Charles Illinois and it had fallen over at some point. Fellow magician and magic historian Terry Evanswood set out to have the boulder uprighted and had a better foundation placed to hold the boulder in place, this he did several years ago.

But beyond that, I was not familiar with Maro. I did some initial research and I realized I did know a little more about him because I had seen his posters. What his life and career were like I didn't have the faintest. So enter Leland Michigan. I was contacted by a fellow from the Old Art Building, which is sometimes called The W.T. Best Theatre. Turns out, W.T. Best was the real name of Edward Maro. Maro's wife had the building built after his death in 1908 and it was dedicated to him. Well, the folks at the Old Art Building along with the Leelanau Historical Society were interested in seeing if I could do a presentation on Maro. You see, on the side I'm known as 'The Magic Detective', and I enjoy searching out old forgotten magic history mysteries. So the Maro challenge sounded like fun.

After months and months of research, I created a 45 minute power point presentation. This included 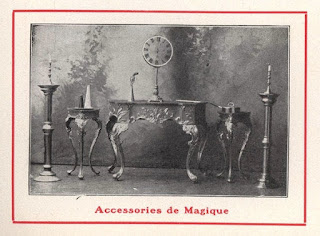 photos of Maro, photos of some of Maro's contemporaries, pictures of Maro's many posters, and a few surprises like images of his props that I discovered during my research. The lecture itself would also include MAGIC, the same kind Maro would present if he were alive. One routine in particular was Maro's, called The Maro Spirit Slate trick. Two absolutely ordinary antique school slates are shown on both sides to be blank. A piece of chalk is placed between them and they are handed to a member of the audience. A number is chosen by another spectator and the chosen number mysteriously is found to be written on the slates. I actually incorporated this into another routine called The Spirit Dial. I knew Maro presented the Spirit Dial, though his exact presentation is unknown.

How,  you might wonder did I know what kind of magic was performed by Maro. Well, mainly through three sources. 1 His elaborate full color posters. 2. A program of Maro's that exists to this day. 3. A smaller program of his that I found within an old magic periodical. These sources helped to point me in the right direction. In the case of the Spirit Dial, there is a photo of Maro's dial in the multi-page program. In the case of the Spirit Slate Trick, I found that referenced in the smaller program and then discovered an actual description of the trick in an older magic magazine from the early 20th Century. The detective work was fun though frustrating at times.

I dug up quite a bit of information on Maro that had not been previously covered in old magic magazines. To my surprise, Kim Kelderhouse of the Leelanau Historical Society also turned up a bit of previously unknown information, which she shared with me at the conclusion of my lecture.

Let me say, I had a wonderful audience for the lecture, they were clearly interested in the subject and the added mix of magic on my part made the event entertaining as well as educational. Oh, and I did present a short Hand Shadow Act in the middle of the lecture as I knew Maro too relied upon Hand Shadows in his presentations.

I had a wonderful time sharing what I had learned about Maro with the residents of Leeland. And now, to my surprise I just found out some more cool Maro stuff from a fellow magic historian. This will have to be added to the file in the event there is a Maro Lecture Part 2. 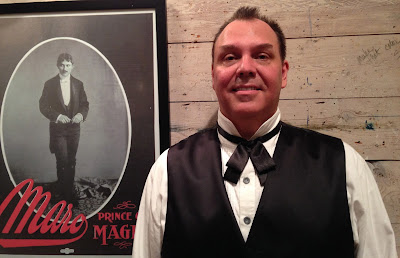 Posted by Carnegie at 6:02 PM No comments: