Update From The Steampunk Illusionist 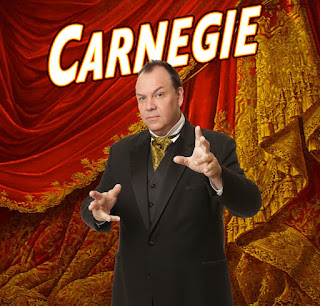 I know I've been kind of quiet lately, but that has only been here. I've been busy working on the show and performing the Steampunk Illusionist Show. As with many projects, this one is in a constant stage of development. We are 'growing' the show as I type this. We will be adding many new things to the show, from new routines and new illusions, to new products to sell after the show.

One of the new routines in the show is our Spirit Cabinet, right from the playbook of Anna Eva Fay 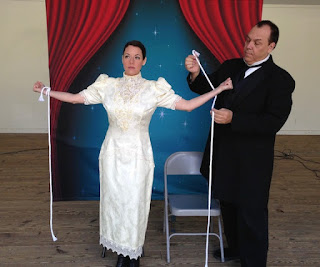 herself. Actually, the Spirit Cabinet will also be the backbone of another show we are creating that is about ghosts and spirits! But we will include the Spirit Cabinet in our other shows as well. We had a great time presenting it during October for many of our Halloween shows. For those unfamiliar with a Spirit Cabinet, here is the basic effect. A medium, in this case my assistant Denise, is tied to a chair  She is placed in a trance so that in this state she can summon spirits of the dead. A table with a bell, tambourine and other objects sits next to her and a curtain goes around the medium. As soon as she is out of site, the bells ring, tambourine shakes and other odd manifestations occur. The moment the curtain is opened, the medium is found to still be in a trance state, still tied securely as before. It's quite an amazing presentation.

There are other new effects in the show as well, but I'll share those at a later date. For now, I would like to share with you an updated promotional video of the show. It's fairly short, and shows clips from different performances. We tried to give it an old timey feel by using an aging filter. I'm not happy that Youtube made me change the music. I had paid for the music I originally had, but for whatever reason, they would not allow it. The music that is on there is similar however to what I had. I hope you enjoy the video!

Posted by Carnegie at 9:16 AM No comments: