Rolling Out Small Version of the Steampunk Magic Show This Summer 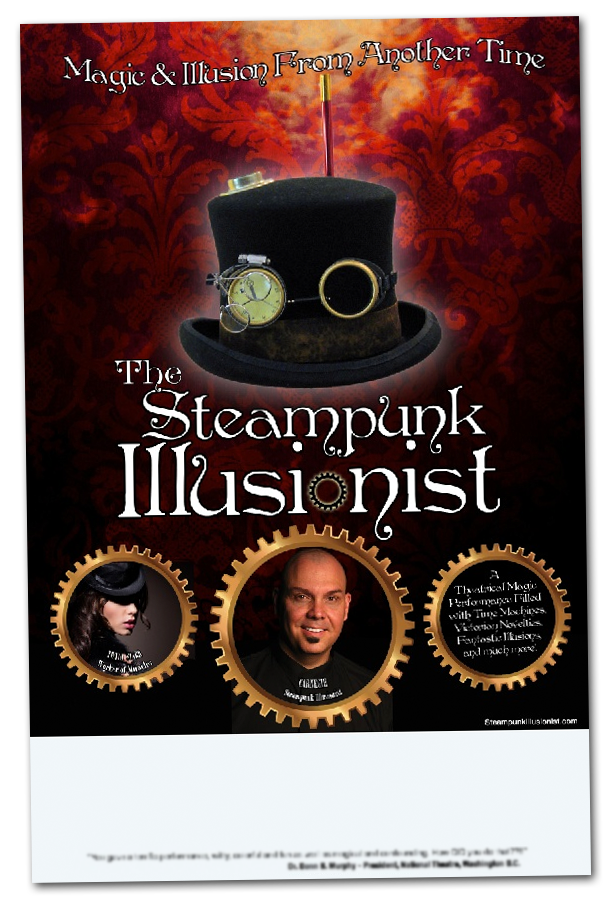 Right now, I'm working on producing a special ONE MAN version of my Steampunk Illusionist Show for Summer. I typically do around 100+ shows from end of June till end of August. Of those 100+ shows, about two dozen of the shows are this special one man show. And there are at least another dozen that are also steampunk but a different kind entirely.

I'm very excited because it's the first time some of the updated Steampunk material will be in the show. One of the highlights will be a special 170 year old animal automaton. A real mechanical creature made of wires and springs and gears and cogs that will be used to locate a selected playing card! This is my ode to Robert-Houdin, the great French Conjurer and clock maker, who was also known as the Father of Modern Magic, though that title should probably updated to the Father of Modern Victorian Magic.

The new Invisibility Machine will hopefully be ready and in the show. This is a very clever and unique take on a well known routine. But my routine and concept takes it into a whole new direction for which I am quite thrilled to do.

My Mustache Gallery routine will be in the show also. This is a fun comedy magic effect loosely based on an idea by Karrel Fox. I have a feeling it's going to play especially strong in the summer programs.

With any luck I will have a new story routine in the show.  It's all written, now it's just a matter of getting the props ready. It's a story about a relative who shined shoes when he first came to America to make money. It's a heart warming story and has a nice moment of magic, with a surprise kicker ending.

There are dates still open for the show too. So if you live in the VA, MD or DC area and are interested in booking a very unique Steampunk Magic Show for Summer 2014 contact me today! info@steampunkillusionist.com
Posted by Carnegie at 12:17 PM No comments:

Happy Easter! And a Little History On Magic Rabbits and Eggs 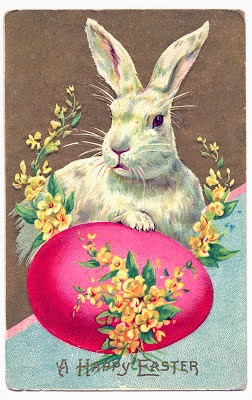 First, HAPPY EASTER!!!!
Second, I'm not sure what Rabbits and Eggs have to do with Easter? But, I do know what the connection is to magic.

Of course, the Rabbit has become an iconic image often associated with the magician. This dates back to the 1800s. The first magician to 'pull a rabbit from a hat' was possibly a man named Louis Apollinaire Christian Emmanuel Comte, known as 'The Kings Conjurer'. Born June 22, 1788 in Geneva Switzerland, Comte became a popular Parisian performer. One of his more famous effects was borrowing a hat and producing various objects from it.

However, The Great Wizard of the North, John Henry Anderson, is credited with popularizing the effect of a rabbit from top hat. If his advertising is any indication, Anderson not only pulled a single rabbit from a top hat but actually several! How or why this imagery of a rabbit and top hat become so associated with magicians, I'm not quite sure. Afterall, there are countless other wonderful effects that magicians have done but the rabbit/hat has stuck in the minds of audiences as meaning MAGIC.

Interestingly, even in the 21st Century, the image of top hat and rabbit is associate with magicians, even though hardly any magicians wear top hats (except for us Steampunk types, and some kid-show magicians) and very few even use rabbits. In fact the United States Govt has made it very difficult for magicians to use rabbits which is a story for another time.

NOW let's look at the EGG. When you see an egg you don't think of magic or magician, but magicians have been using them for hundreds of years. In the 1700s a magician named Isaac Fawkes was a popular 'Slight of Hand-Man'. He performed at Fairs and Festivals in Europe and was known to conjure with eggs. He might have been the creator of the early Egg Bag, which can be seen in the image to the left. The Egg Bag was a cloth bag that could be turned inside and out and yet produce egg after egg after egg and eventually a live chicken.

A little more than 100 years later, the Egg Bag remained in the repetoire of magicians though it had gone through some changes. Max Malini introduced a bag which was much smaller and used only a single egg. The productions and vanishes of the egg became even more mysterious and impossible in his hands. 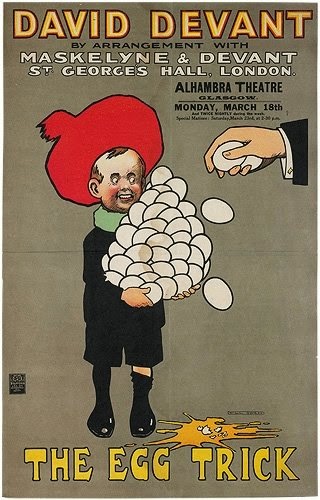 An interesting combination of the top hat and eggs occurred in a trick called 'Boy, Girl and Eggs'. It began with the magician getting two volunteers onstage, a boy and girl. An empty top hat was displayed and the magician would reach inside and produce an egg. This egg would be handed to the girl who was instructed to give it to the boy to hold. Then another egg was produced and the same procedure followed. After 5 or 6 eggs the boy found it rather difficult to hold onto the eggs and the comedic moment kicked in. The magician and girl acted oblivious to the boys dilema while the audience forgot about the incredible countless production of eggs from an empty hat and instead focused on the boy struggling to hold onto the eggs. Needless to say he would eventually drop one here and there. Both David Devant and Howard Thurston made this routine popular in their respective shows.

Today, egg tricks can still be found in the world of magic. One of my personal favorites was demonstrating the true strength of an egg by wrapping it in a cloth and having a spectator try and crush it with the grip of their hand. If done correctly, the egg will not break! But in my routine, it never failed that the spectator would break the egg and ruin my cloth handkerchief. So I would snap my fingers and remove the egg, completely restored and intact! Then I would break it into a glass to prove it was real! Most of these tricks have their origins in the Victorian Era but good magic still captivates even today!
Posted by Carnegie at 12:50 PM No comments:

Ripper Street is Returning for a Third Season 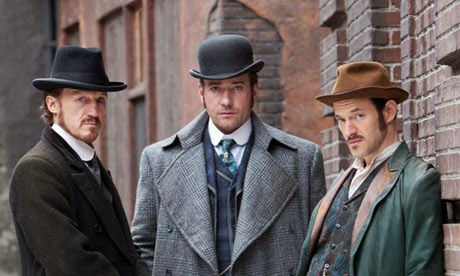 Ok, this is not magic and not exactly steampunk, but it IS VERY VICTORIAN, so in my book it fits. Ripper Street is produced by the BBC and it's my favorite show on TV......well, actually I've never watched it on TV, I saw it on Netflix.

Anyway, I've only seen Season 1 of the Show. I had heard that after Season 2, the BBC announced in Dec 2013 that the show was cancelled. And then amazingly, Ripper Street came out to be the #1 Favorite Drama in some Poll taken in the UK. So the next thing you know, Ripper Street Season 3 was announced! I'm getting that news a little late, but still, better late than never. 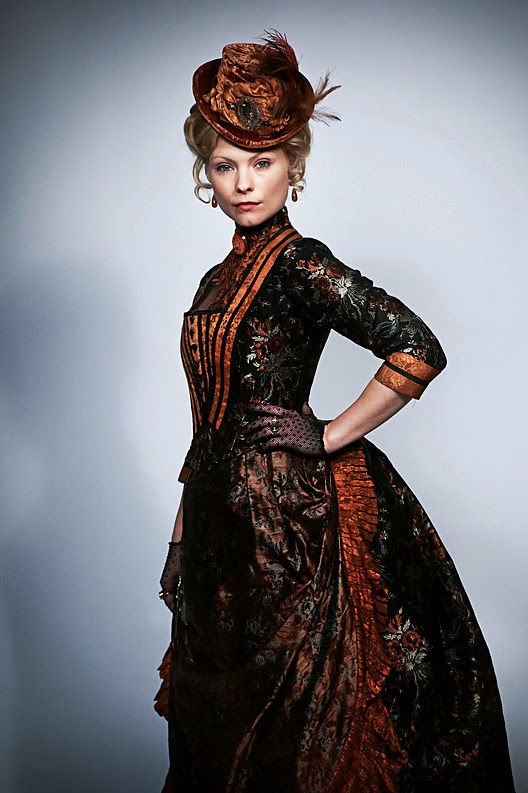 If you have never seen Ripper Street, you simply must check it out. It is set in 1890s England, in the Whitechapel area where the Jack the Ripper Murders were supposed to have taken place. The story takes place AFTER the Ripper Murders, but there is still plenty of crime and drama that takes place on these streets. The show also has a touch of Victorian CSI to it which is highly interesting.

The writing and acting on this show is fantastic. The costumes are incredible and the Victorian dialogue that is often used is frankly, educational!!!! And the characters, wow, they are so gritty and human and damaged and full of depth. One of my favorites is Long Susan, played by MyAnna Buring, who is a dead ringer for Kelly Rippa.

It's great stuff. Season 1 is available on Netflix. Season 1&2 are available on iTunes, but you'll have to pay for them there. Go to the official site and you can buy season 1 on DVD or BlueRay!

If you are venturing down the road to presenting a Steampunk character of any kind, whether for fun or for performance, this show Ripper Street, can be of great help in pointing the way towards costuming and even character traits. If you haven't seen it, please give it a chance, it's a fine show!

OH, I'm just watching the first episode of Season 2 and the Elephant Man/John Merrick and his Doctor, Dr. Treeves make a brief cameo! Come on, that is cool!

UPDATE: Well this is interesting. I just found out the character of Detective Reid is based on the real Detective Edmund Reid. And the real Reid had a passion for sleight of hand, not in the criminal sense but in the MAGIC sense! So there is a connection to conjuring afterall!
Posted by Carnegie at 6:05 PM No comments: