A Night of Virtual Magic

Above is a photo from my current show online called, A Night of Virtual Magic. This is my Virtual Magic Show on the Zoom platform. It is actually my second show on zoom but it's the first evening show. What is special about this show you might ask? Well, I've really worked hard to create a unique product that is highly interactive, but retains a bit of the theatrical feel from my stage shows. I use a lot of green screen backdrops and also real back drops in order to change the look by a change of scenery. I incorporate three recorded segments into the show. These allow me to showcase magic that I can't do because of space limitations. 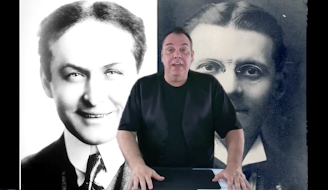 In the photo above, you can see the smiles of laughter on everyone's face during one of the routines. In case, you're wondering, the three white squares at the bottom, are people who did not have their video cameras on. I noticed we had some issues with people dropping out and coming back on. By the end of the show, all cameras were on. You can still see the video feed of the show if your camera is off. The only thing is I cannot see YOU.

The way I do the interactive portion is interesting. After you purchase a ticket, you receive an email with the code to see the show, and also a list of things you'll need for the show and some tips. One of those tips is to make sure the room you are watching the show in is well lit. This is so we can see you. In earlier shows, many folks sat in the dark and I couldn't see them. So I added this suggestion that you make sure you have lights on so you can be seen. It improves the overall look of the show. As for that list of things..it's a simple list: deck of cards, some coins, a notepad, and a novel (book). These items are for the AT HOME routines. But there are other interactive routines audience members can do via the screen. For example, I have a routine where  two people choose cards from a deck. Well this is still possible without them being here in person. As long as their camera is on and their sound is on, then it works.

Another thing I do is use my green screen as a power point presentation. This allows me to tell stories and 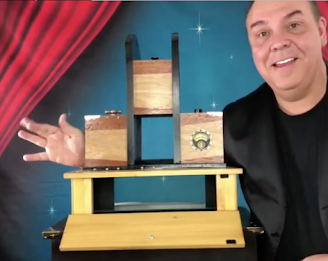 change the images in the background as the story evolves. An example of that can be seen in the photo to the right which shows me with a picture of Houdini & the Great Lafayette in the background.
My desire was always to close the show with an illusion. Because of my current situation, I only have one illusion on hand, my Disectolator mini-illusion.  And it proved to be a fun, quick, highly visual and stunning illusion to close the program with. BTW, the rest of my illusions are 600 miles away in a storeroom. I'm in the process of moving but COVID has slowed that down. So I'm using what I have on hand.

One thing about this illusion. Because we use green screen during the course of the show, I purposely made the decision to present this against a normal fabric backdrop. It would be so simple to create this same illusion via a camera trick, but that is not how this works. Instead, we can walk behind and even pass our hands through the open slots to prove what you see is what you get!

During last night's show I announced my plans for the future.  Those plans are to have a new show available every couple months. So right now the Night of Virtual Magic will run till mid September. It will be followed by The Astonify Show & Virtual Seance. This show will run till the end of October. That will be followed by a Virtual Christmas Show, which will run in December. And with any luck, I'll bring out a Virtual version of The Steampunk Illusionist Show in January 2021.

How LONG the virtual shows will continue is anyone's guess. This is all due to the pandemic and my desire to give people some incredible magic and a really fun experience right from their home. It's a much needed form of escapist entertainment, in a time where this is a lot of uncertainty. And because I have no shows otherwise, it is now the way I bring in income.

If you'd like to get tickets to The Night of Virtual Magic. Simply go to ZoomMagicShow.com and choose your date. BTW, I am also doing a show for kids on select afternoons. These are totally different from the evening programs, and are really geared to younger aged kids. So if you know of anyone interested, they can also go to ZoomMagicShow.com and be sure to choose an afternoon date. Do NOT pick an evening show for kids as they will not enjoy it. Older kids, teens, will. But not younger kids.

Posted by Carnegie at 8:43 AM No comments: 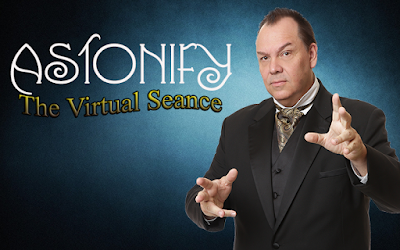 Well, it appears that the Astonify Show WILL be back in 2020 after all. The one difference is this version will be VIRTUAL. It will still be presented LIVE and it will be INTERACTIVE. I'm currently working out the various details.  The shows will be for fairly small groups, but I haven't decided how small yet. When you purchase a ticket you will receive in the mail, a package with some props needed for the show. These are the same items you'd receive if you were part of the show in person. AND not everyone gets the same package! Some items are duplicated, but some items are unique, this allows a slightly different experience among the attendees.

I am expanding the SEANCE portion of the show this year and it will be more interactive. That means there is the potential for very spooky/creepy things to happen in your own home! We have been beta-testing much of the material and so far the responses have been beyond my expectations. I honestly never envisioned doing the show this way, but circumstances being what they are, this way is safe and frankly MORE people will be able to see the show than could in a typical season.

Dates and Ticketing information will go online in Early September. Dates for the show will run from Mid September till the end of October! If you go to Astonify.com right now and sign-up for the newsletter updates, you'll find out about the dates before everyone!!!
Posted by Carnegie at 12:06 AM No comments: 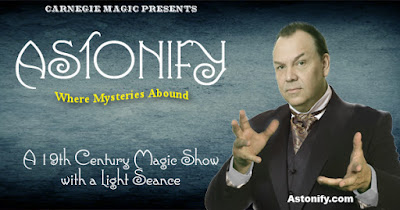 I've been kind of silent this year, but the good news is I'm bringing back ASTONIFY in a bigger and better way in 2020. I love the concept of this show, a Victorian Magic Show with a Seance at the end. I may pull back on the Seance promotion, even though it will still be part of the show. For whatever reason, when people here or read 'Seance', they think Halloween. And my show is not just for Halloween, in fact, it's for ALL YEAR LONG.

I may bring in more of the Steampunk elements to the show that had been in there before.....maybe. I'm just looking to revamp the show a bit. The changes probably won't be so noticeable to audiences, but to me and my crew they are big.

UPDATE: All Astonify Shows, in fact, ALL Shows period have been suspended thanks to the Chinese Coronavirus, until further notice. I wish I had better news, but I'm sure you're more than aware of the situation.
Posted by Carnegie at 9:07 AM No comments: