Ripper Street 3 Is ON, and More Good News 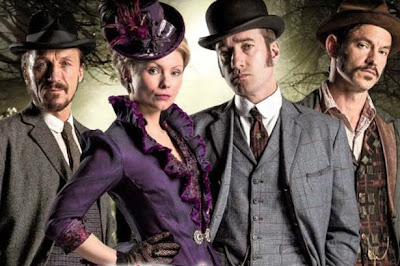 As you may know, I love this show called Ripper Street. It's very Victorian as it takes place in the late 1800s, just past the time of the Jack the Ripper murders, thus the name. It's extremely well done and after two fabulous seasons the BBC cancelled the show. But thanks to a huge campaign by the public, it was brought back for a third season.

The third season started airing just a few weeks ago. I believe they are three episodes in to the new season and wow is it amazing. The storyline picks up 4 years after the events of season 2. Most of the main characters have been split apart and are off doing their own things. A tragic event brings them all back together. This is the opening episode and it's quite amazing. But it's the second episode that will fry your brain, if you're familiar with the characters. I won't reveal what it is, but you must check it out. It's on BBC America and it's also available on iTunes and Amazon Prime I think.

And there is even better news. Ripper Street has already gotten the green light for a Season 4 and 5. That is spectacular news!!!!

There is much to like about the show, but I'm really taken with the costuming and the language. The way they speak and the various slang words they use are all authentic. I find it to be educational as well as entertaining. It's worth checking out if you've never seen it and trust me, you'll be hooked the same way I am!
Posted by Carnegie at 4:30 AM