The Steampunk Illusionists Are At It Again! 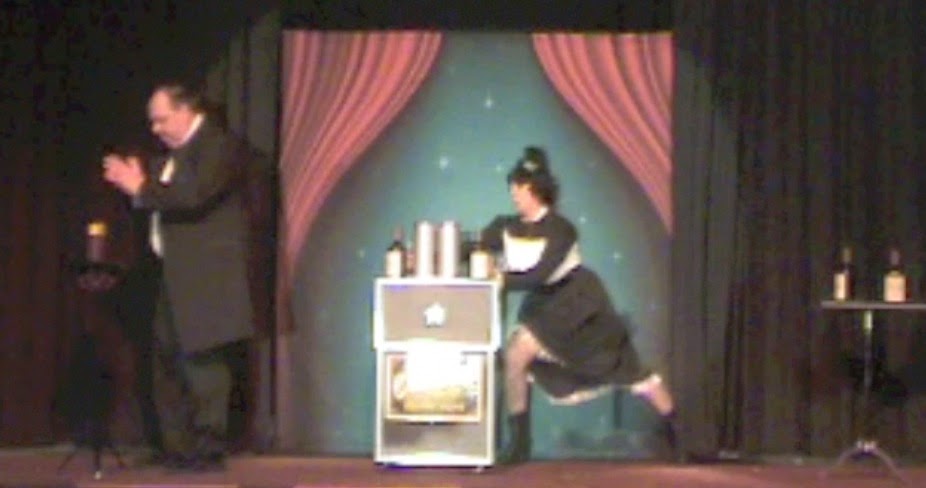 The Steampunk Illusionists were back on the stage this weekend with a little magic. After quite a long absence their Traveling Bottle and Glass routine returned to the show. This routine was removed from the show almost 10 years ago. Through a combination of misunderstanding, miscommunication, and just a bad decision, the routine was pulled and probably would never have seen the light of day again had it not been for a recently discovered video of the routine.

At the time of it's removal from the show, The Traveling Bottle and Glass was in an experimental state. That means we were changing the routine fairly often, trying different things to see what would work and what might take the routine to another level. In the midst of all the changes, the original routine got lost. But thanks to the forgotten video recording the old routine has been brought back.

The classic trick is known as The Multiplying Bottles. But we prefer to call it the Traveling Bottle and Glass. We do not do the classic Ken Brooke presentation of the trick. Ours is done to music and at first appears to be a one person routine, but then a mischievous assistant shows up to wreak havoc on things. The result is a very funny comedy routine with the magic taking a secondary place.

We also presented The Disectolator in the show. In fact, this was our opening illusion. This is the device where I slice my arm into several sections and actually remove one of the sections. It's a quick routine, barely a minute, but a nice opening.

Our Ring in Bread made it into the show as a last minute decision. I'm glad we put it in the show but not for the usual reasons. We need to really update this trick and punch up both the magic and the comedy, so having it in the show was a reminder to start working on this to take this trick to the next level. I know there is more to work with here, and this routine has not reached it's full potential yet. It's possibly that the show on Saturday will be the last time the routine will be in the show. There will still be a borrowed ring routine, but whether it is discovered inside a loaf of bread or some other place is yet to be seen. Time will tell.
Posted by Carnegie at 7:17 PM