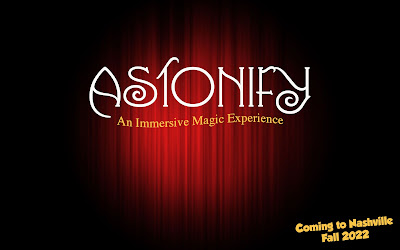 I am in the process of revamping my show called The Astonify Show. Previously, this was presented as a period piece. It was a Victorian Magic Show with a Seance. The last two years the show has had to go virtual. Obviously, the virtual shows were due to Covid. The shows were all well received, but something came out of the shows that I didn't expect. One of the best things about virtual shows is the ability to make things interactive. Now, magicians have been doing 'interactive magic' for a hundred years, but the type of 'interactivity' has changed. And this has led me to a new concept for the show.

Will I keep the seance? YES! In fact, it's going to be even more interactive. The old version of the show had a Spirit Photography routine that everyone in the audience could partake in. It involved tearing up a set of SP-images and the magic would progress from there. But I've come up with a completely different take on this routine and no longer need to destroy these beautiful photos at every show. Now people can take home a keepsake from the show, rather than having to throw away the pieces. There is more to the Seance as well. But I'm keeping some of these newer things underwraps.

The Audience Deck of Cards is a routine I've already added to my LIVE shows. This allows every single person in the audience to choose a playing card and I will find each and every person's card! It's a crazy piece of magic and oh so fun.

UPDATE: I first started to write this back in March. It's now July, and here I am again, working on this rendition of the Astonify Show. I love this concept of Immersive Magic and getting the audience IN on things. What I don't want is the typical way of using audience members. I want to give them an experience, a unique memory, something that they can take away and share with friends and family. I want them to feel as if THEY were truly part of the magic, which frankly, they will be.