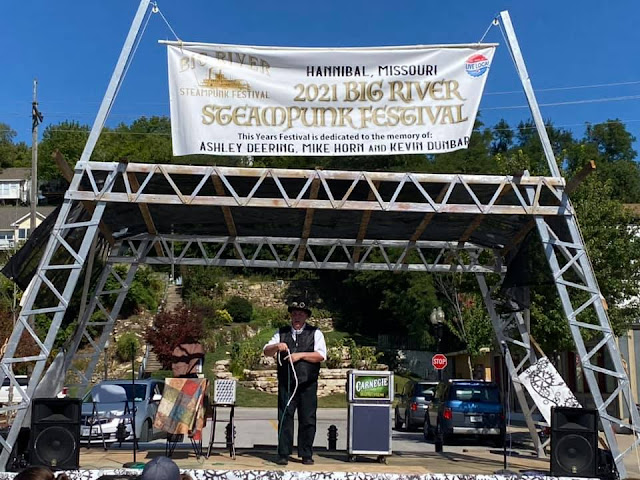 This past weekend, I was a featured performer at the Big River Steampunk Festival in Hannibal Missouri. And though Hannibal is the home of Mark Twain, I felt more in line with Charles Dickens, as it was the best of times and the worst of times. Let me explain...

On Saturday, the weather was overcast, with a rain that seemed to continue all day long. It was never a heavy rain, but more a constant thing. And it was ungodly humid. WOW! I'm from Northern Virginia, I've experienced humidity. But this was something on a whole new level.

My first show was at noon. It was in front of Mark Twain's boyhood home!!! I didn't even make that connection till later, that's how off my game I was. I started making announcements for my show about 15 minutes early and by showtime I had a nice grouping of folks even with the rain. And speaking thereof, I discovered WATER to be the arch enemy of MAGIC, lol. My first trick, a simple routine with a piece of rope was proven impossible as the wet rope was sticking to itself and binding while I was trying to present it. So I had to bail on the first trick. It was at that moment I went into survival mode, I threw out all the planned magic and let experience and knowledge take over. I began doing material that was tried and true and that hopefully wouldn't be too affected by the rain...

That said, a few of the routines were card tricks and they went GREAT. But it was the aftermath that was an issue. When I finished with a routine, it went into a case with an open top. I soon discovered I needed a covering as everything in the case was getting wet. One problem after another had to be solved on the fly.

I had a good mixture of kids and adults helping in the show. The audience stayed the entire program even in the rain!!! They were so wonderful and kind to do so. Afterwards I signed some autographs and packed up.

Now, notice what I said, I packed up. AND went straight to my CAR. I was exhausted from the show from the rain and the humidity. My clothes were all sticking to me, it was awful. I sat in the air-conditioned car for a while until I cooled down. Later when it came time for show two (at a different location), I unpacked and headed for that venue.

This time I was in the DEPOT, which was the old train station. The show was sold out. No worries of rain 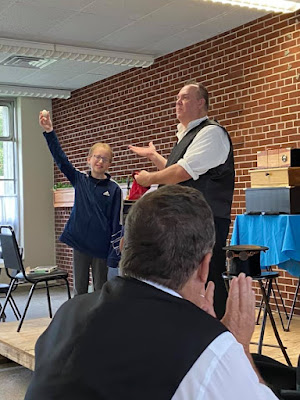 because it was indoors. My only issue here was exhaustion from earlier. And yet, I did the whole show and had a fantastic time with a most wonderful audience of Steampunk fans and followers.

Sunday. Well, this was the exact opposite weather wise. It was BEAUTIFUL. The weather was perfect. I had a morning show at 11am on the Steampunk Stage which had a huge crowd. Big difference between that show and the day before....1. No rain and 2, they had benches for the people to sit. The other morning venue didn't have a place for folks to sit. I had a few people from the previous nights show come up and say hello and stayed for this show as well.

Sunday night, back at the Depot and that show went splendidly. It ran like clock-work to coin a Steampunk phrase! The audience reactions to the show were incredible. My energy level was much higher than the day before, though I doubt you could tell. I think I projected well both evenings, despite how I was feeling inside.

I did leave two things out. I had planned to do my Tug of War Rope Tie. But the tope got wet from Saturdays show and I feared that once wet, it might be impossible to get out of and also impossible to untie, in the event I couldn't get free. Wet rope and escapes are very problematic. The other thing I left out was my Disectolator. I did use it Saturday night, but the humidity was causing the wood to swell, just enough to make the prop difficult to use. The disectolator is a device I put my entire arm into. Then two real metal blades are shoved into my arm. Next I pull out the middle area between the blades, zig-zagging my arm. It's a wonderful image. But the space between the blades and the wood was so tight I could hardly get the inner section to move. Considering I only had one good arm to work with, the other being inside the device, it became near impossible to use. So the routine got dropped. But it made a nice piece of scenery!

All in all, despite the weather, I had a fantastic time in Hannibal. Special thanks to my new friend Brent and also Tammy Riley for bringing out to The Big River Steampunk Festival! 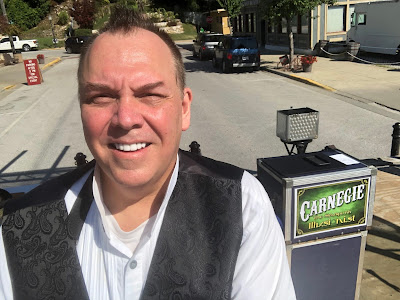 (I grabbed those pics from the BigRiverSteampunkFestival Facebook Page)

Posted by Carnegie at 6:08 AM No comments:

Email ThisBlogThis!Share to TwitterShare to FacebookShare to Pinterest
Labels: #BigRiverSteampunkFestival 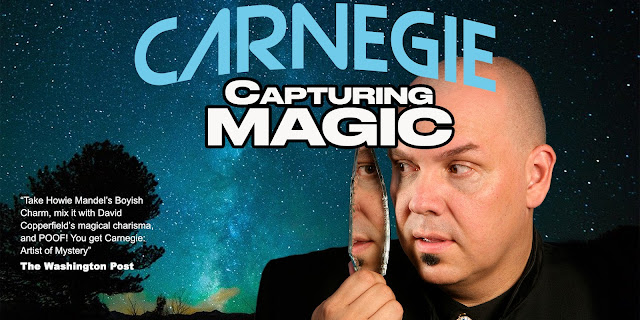 It seems like forever since I wrote on this blog. Thankfully, I have news to share. I'll be doing my new show, Capturing Magic, virtually for the next few weeks. This was a show that I designed specifically for the virtual world of magic performance. The idea was to have a mixture of interactive magic and highly visual magic. That was my goal for virtual shows all along, however, this time I had a lot of experience doing online magic so it gave me a better idea of what to shoot for.

There is one thing that sets my show apart from others and that is the inclusion of a story, often told without any magic at all, though sometimes I do use magic. I have several stories that I want to include in this show, but I'm still working them out. If you look at the poster image below you'll notice in the upper right hand corner the image of a fairy. This is because I wanted to share the story of the Cottingly Fairies. Take a good look at that poster and see how many fairies you can see in the poster, there is more than one.

If you are unfamiliar with the Cottingly Fairy story, it involves two young girls and Sir Arthur Conan Doyle. There is a movie called 'Fairy Tale: A True Story', that was made about the whole adventure. I'm not going to tell you the story here, you'll have to wait for the show. And as of right now, the story has not made it into the show, but I hope to have it in there very very soon.

If you are interested in watching Capturing Magic, tickets are easy to come by, just go to ZoomMagicShow.com and follow the prompts to the ticketing page. One ticket per household, quite inexpensive and a fun family activity! 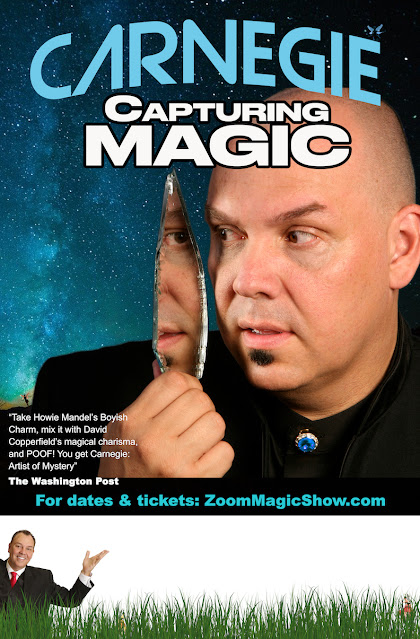 Posted by Carnegie at 6:40 AM No comments:

Astonify Run for October is Complete 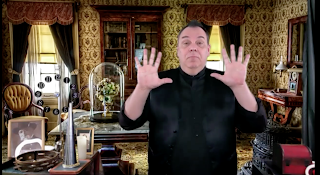 The run of Astonify Shows for October is complete. We may or may not have one tomorrow Nov 1st. No tickets have sold yet and it's anyone's guess if tickets will sell. If they don't then we've finished the Halloween Season. I've got plenty to complain and rant about, but I'll save that. I'd rather share some stories from the show.
Spirit Clock
As you may know, a signature piece in my show is the Spirit Clock. This is basically a glass clock face with numbers but no inner clockworks. There is a small protruding rod in the center to place an arrow-like pointer on, but that is it. You spin the pointer and plead with the spirits to stop at a chosen number. To say it works like clockwork, would be a poor play on words, but yes it works every time. Except. Except when Spirits get involved. I always know when spirits are present because the clock dial never lands where it is supposed to. To the audience it looks like I can't do anything right. But I know forces are at work that may make the rest of the show even more fun. THIS is exactly has Saturday night's show played out. The dial would not land on one single number called.  The night before, while rehearsing the show, everything was working fine until I said a rather unusual line, which I thought was funny. Apparently, I was the only one, as this thing stopped functioning. Then when the show was over, I told my brother, "watch, I'll go over there and the thing will work." Ummm, watch the attached video... 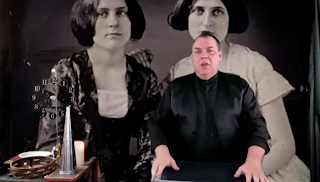 The rest of the show, AFTER, the Spirit Clock, went smoothly, and in fact, went better than smoothly. I was almost concerned at how well the spirit trumpet played. And the final routine, which was a bonus really, was a smashed hit. What a night! I think I still like the LIVE -in person version better, but it was great to turn Astonify into a Virtual show. Next up is converting the Christmas version of Astonify into a Virtual show.
Posted by Carnegie at 12:03 AM No comments: